Aerial Shots Of P-a-P.
Look for your home.

Thanks to Steve and Christine Denton (Coombs) I was able to take a digi pic of these two pictures published in the Texaco Star in 1964. 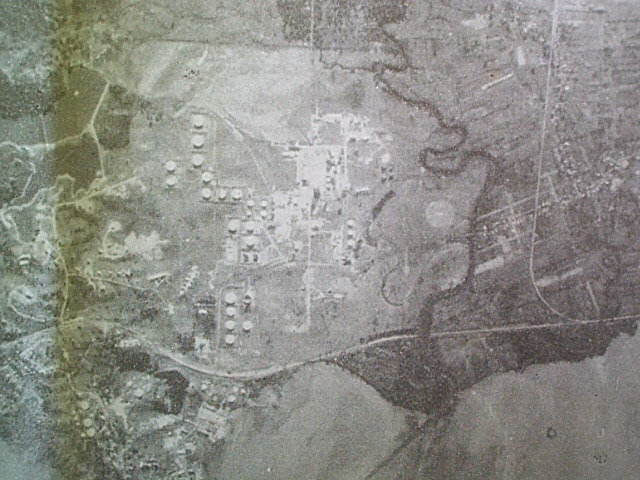 The first pic was taken directly over the refinery by a KLM pilot in 1938. Noticeable is the old Southern Main road that ran next to the sea and across the pic from left to right near the bottom, and the twisted path of the Guaracara river meandering from top to bottom to the right of the pic. You can see some bungalows, what might be an office, and a small reservoir sort of mid-left in the picture. Wow! great stuff....thanks Chris. 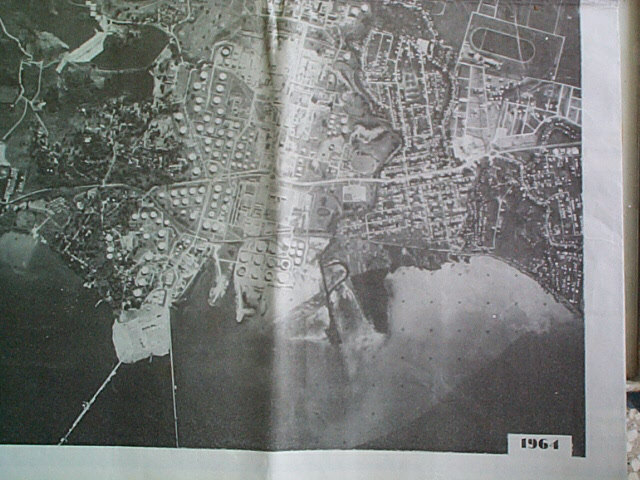 In the next pic, taken in 1964 by a reconnaissance aircraft from 58 Squadron RAF, the same year that it was published, the view is more like we knew......St.Pete's is there, the Club, Guaracara Park, the roundabout and Admin' building, The Avenue, No 5 Reservoir dam wall, Lube Oil Jetty, The horse racing park in Marabella.....Wow!....a lot happened in 26 years.

Dave Church was kind enough to e-mail in the following aerial views of P-a-P....no matter where you look at it from, the beauty and the memories are still there. 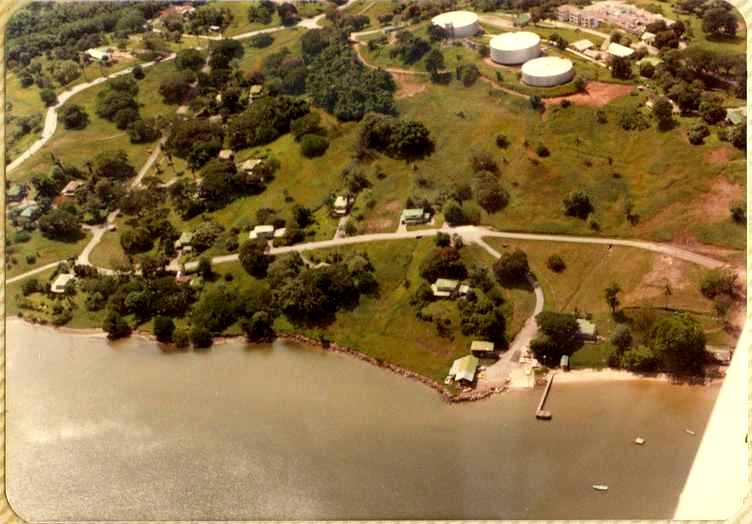 Where better to start than over the Yacht Club and part of Carib Valley. In trying to age the picture I can only notice that the last house that the Cartys lived in near the gate in La Carriere is already gone so the picture is not real old. The Augustus Long Hospital is clear in the top right corner of the pic. The end of the Yacht Club jetty is not as it is today, and the raft is there off the beach. 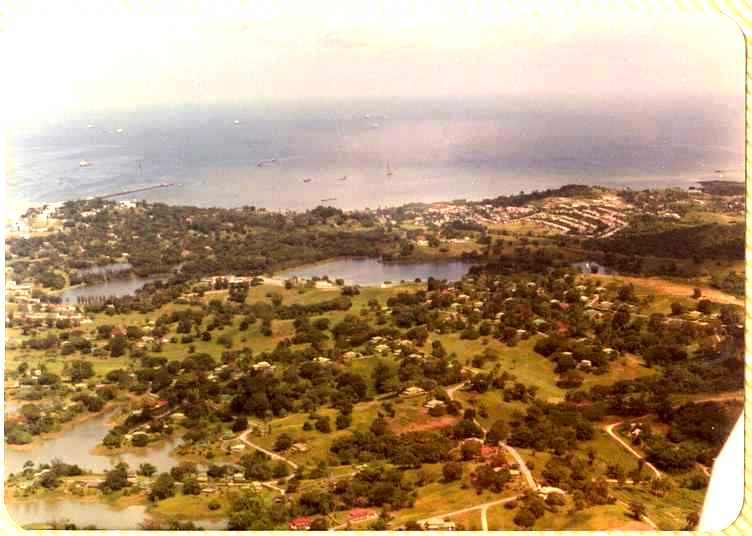 In this very panoramic shot there is a lot to see so I'll try to fill in a few markers and you can fill in the spaces....top left is the Lube Oil Jetty. Below is just a hint of No 2 reservoir (Regent Road side), then next to it nearer towards the middle is No3 dam (the one near No 1 Mess and on the other side of the spillway), going right of course is the club and No 5 Dam with the dam wall. Coming down to the lower left corner is No 4 dam, Roble and Cedar avenues. About middle is the Samaan/Tamarind avenue......Mango is already turned in to golf course, and the old wooden bungalows in Bay avenue are still up....I can see my old wooden home at 4 Bay and the concrete one at 3 Bay......remember my white Austin Healey Sprite - PE1912. 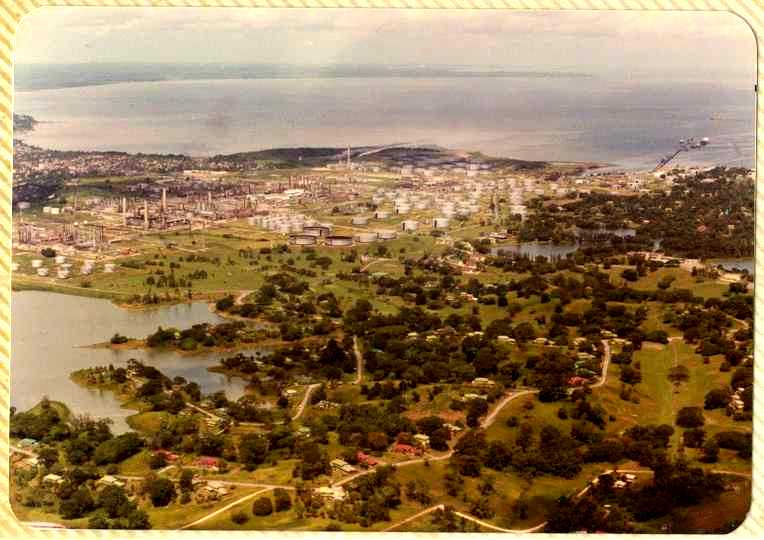 In this equally panoramic shot the 'plane is slightly North so can see the old pipeline jetty at top right. The Mango Avenue golf fairway is in direct line with the angle of the camera in a straight line down from the jetty and the club. The sharp corner between Samaan and the start of Tamarind is clear at bottom middle. St.Peters is at right of centre, with the road that lead to the main gate (The Avenue) seen as a straight line going towards the top of the pic. 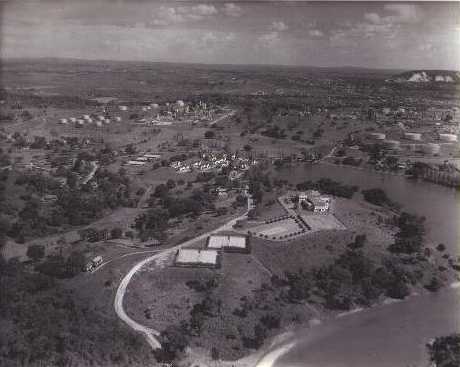 Wow!! what a wonderful old shot......I mean a real old shot of the PaP club. Note how untouched San Fernando hill is, No pool and pool verandah, no squash courts, no "Club Road", No new tennis courts, no No8 Topping, De Sulfurization unit or 4VDu, no central steam plant, no No5 reservoir. What are the long buildings behind No1 Mess just about where the Endridge tennis courts now would be. Fabulous shot...compare to the one following which unfortunately has a closer focus. Thanks to Geoff Pallant. 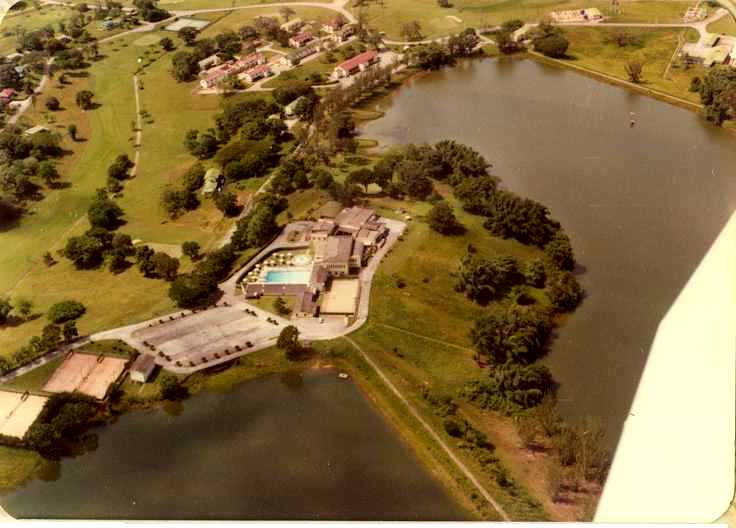 We started with a lovely shot of a place close to the hearts of all who have voiced-in, so it is fitting to close with one equally important.....The Club! The No 5 dam wall is as I remember it angling down towards the bottom right......now it is heavily covered with trees and shrubs. Don't know what day or time this shot was taken but the car parks are all empty!!....is it the day and time or just a sign of the times. No 1 Mess is clearly visible, and Dave just missed the Anglican Church. Look for Endridge Ave and tennis courts, and the Club Manager's home....remember the Archers and Rays living there....... Roger and Carol Tom Yew live there now. If you look carefully just below the club and past the Club Manager's house you can see where the Ozzie, Mackenzie lived near No 1 Mess.....we went to war with him and seem to remember that war being partly responsible for his early departure from P-a-P. 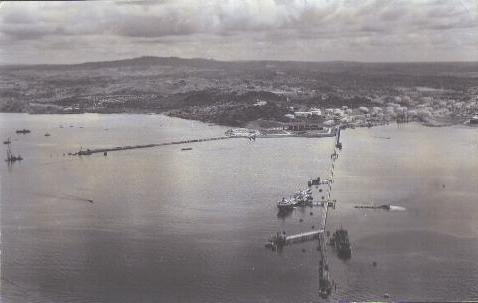 Another great old shot from Geoff Pallant. A view of the foreshore taken off of the end of the main jetty. On the jetty itself the pipe manifold known and "Bent 80" and the old sea water pumphouse are clearly visible. On shore it is clear the the "Lube Oil Jetty" and the whole foreshore part of the Lube Oil project is under construction. Memory doesn't permit recollection of the wreck on the right or South side of the jetty, but the tanker alongside No 2 Beth on the north side is an old T2 Type......plus or minus 19,000 tdwt. Probably the Vestfold or one of the Regent ships. This would have been early 1960s